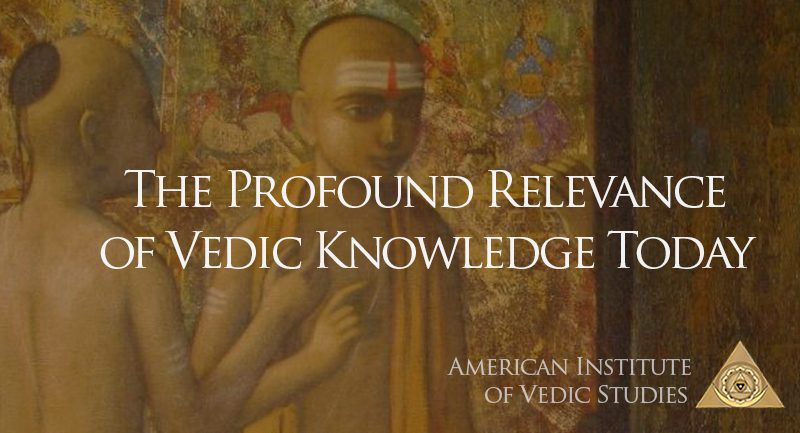 The ultimate technology is not that of external machines and computers but arises through mastering the powers of our own awareness and prana, such as the great Yogis and Rishis have been able to achieve.

When people today learn about India’s ancient Vedas they discover a tradition over 5,000 years old guided by illumined seers living in harmony with nature, chanting arcane mantras, and performing mysterious fire rituals. This modern image of the Vedic world appears fascinating but is also difficult to understand, suggesting a mystical fantasy more than any deeper reality.

Yet this poignant image of the Vedic living is an introduction into a radically different worldview than our current high-tech society, invoking a cosmic vision that takes us beyond time and space to the origins of the universe much like modern physics, but in an experiential way within our own deeper consciousness.

Today, we find Vedic systems of knowledge spreading worldwide through teachings of Yoga, Vedanta, Ayurveda, Jyotish and Vastu, along with numerous books, courses and teachers. Some would like to keep Yoga apart from this mix as an independent tradition, but it is easy to see that Yoga originally arose in the Vedas as their application through ritual, pranayama, mantra and meditation. One branch of Yoga took shape as one of the six schools, or darshanas, of Vedic thought rooted in Vedic values and practices. We cannot separate Yogic systems of knowledge from Vedic systems of knowledge, though variations between individual systems naturally exist and Vedic knowledge has a wider scope of application addressing the whole of life.

What is Vedic Knowledge?

Veda is a vast tradition of knowledge on all levels, not only mundane but also spiritual. Veda itself means knowledge, not mere information but transformative knowledge born of inner perception, deep meditation and higher consciousness, what can also be called Yogic knowledge. Its basis is not the intellect or any technology but our inner awareness in the state of Samadhi. The Vedic mantras reflect knowledge of the Rishis who were said to have understood the cosmic sound vibration OM and its subtle energies that sustain all existence and guide all life.

The Vedas are not mere religious books and do not propose any articles of faith or contain any creed or commandments . The Vedas direct us to discover the Divine and cosmic reality within ourselves, for which they provide the guidance and the practices for each one of us to apply as per our temperament and our karma. Vedas teach that your own inner being is the supreme reality, not any theological concept.

Vedic knowledge represents not only the ancient past of humanity but also the future  and is once more spreading globally, It helped shape the characteristic features of India’s vast and enduring Dharmic civilization throughout the centuries. The Vedas were formulated to teach Dharma, the natural laws of the conscious universe. India’s traditional philosophies, arts and sciences have strong Vedic connections. The Vedas were one of the main inspirations for India’s Independence Movement, particularly through Dayananda Saraswati, Lokmanya Tilak and Sri Aurobindo, and India’s great gurus today continue to honor them including Paramahansa Yogananda, Maharishi Mahesh Yogi, Swami Dayananda and Swami Chinmayananda, among many others who have traveled worldwide.

The Vedas inspire us to awaken a Rishi vision within ourselves. The Rishis were seers of the highest order, cultural creators and world-makers, working with the powers of cosmic intelligence. Their concern was both with the individual and the society, creating a Dharmic culture and Yogic way of life for all. Such new visionaries are needed again today, who have a vision of the future rooted in eternal wisdom and a respect for the sacred nature of all life.

India as a culture and civilization of knowledge, both scientific and spiritual, inner and outer, culminated in the supreme science of consciousness, which is spiritually speaking the most important science for the entire world. Such a Vedic knowledge-based civilization is more than information technology, though it can work with it and possibly transform it. Vedic knowledge is post-industrial and post-modern, one could say, though it comes to us from the dawn of history, its vision is beyond time and space.

The Western world has certainly succeeded in developing powerful outer systems of knowledge in terms of science, technology and medicine, but remains unaware of the inner powers of the psyche and how to access them in an experiential manner. Vedic knowledge systems provide us the inner knowledge of the subtle energies of life, mind and intelligence that permeate the universe, and allow us to link up with these in our daily lives.

The future of humanity consists not just of technological progress but of a deepening awareness and a higher evolution of the human mind and brain into cosmic consciousness. The ultimate technology is not that of external machines and computers but arises through mastering the powers of our own awareness and prana, such as the great yogis were able to achieve through practices of pranayama, mantra and meditation.

We do not need spaceships in order to travel throughout the universe, however important these may be to develop; we can do this within our own minds, once we discover the inner power, space and silence within us that contains the entire universe such as the Upanishads teach. The entire universe dwells within us as an expression of our own deeper nature.

Mere outer political revolutions end in violence and fail to raise humanity, without an inner revolution in consciousness as taught in Yogic and Vedic knowledge. A sophisticated media means little if we do not have the power of attention to control our minds, or discern what is true or false in what the media shows us. Our inner eye once awakened can see more than any outer camera. The best medicinal drugs fall short if we are not aware of or able to work with our own prana and find health and happiness within.

The best internet connection cannot compare with an inner connection to the Cosmic Mind that is the repository of all knowledge in the universe. Let us not forget our deeper soul exploration of consciousness in our expanding exploration of the outer world. This is the Vedic message. We can balance science and spirituality through Vedic knowledge systems, Yoga and Vedanta. In my work and writings I have aimed to share an integral Vedic vision of this deeper knowledge by a an integral approach to Vedic knowledge systems. Please join us in this inner adventure!

Learn the ancient art of Vedic Counseling and Life-Guidance to live a Vedic life based upon Dharmic values and right management of your Karma. Learn how the Vedic Sciences of Yoga, Vedanta, Ayurveda, Jyotish and Vastu fit together into an integral model of optimal well-being and Self-realization.