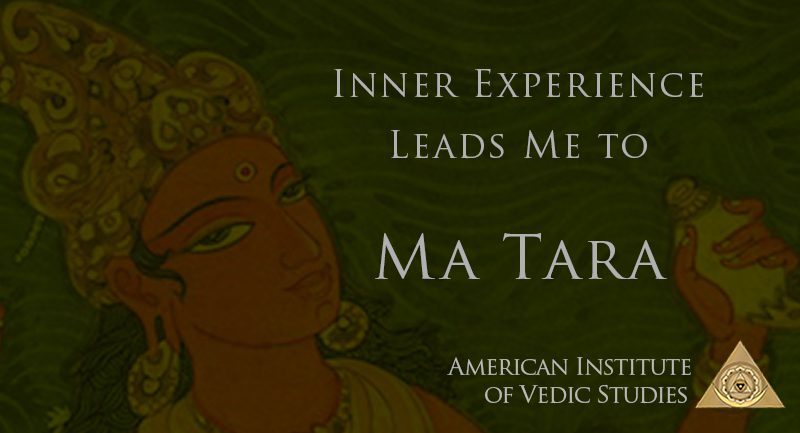 ”Saktivikase tu siva eva” – Pratyabhijnahrdayam
On the unfolding of Sakti, one becomes Shiva

At the early hour of Brahma Muhurta, the sacred time of Brahman, on a beautiful, still dawn of the thirtieth day of the month of March, I woke up to the resounding, powerful vibrations of the sound OM………… The white washed walls of my temple room resonated with its reverberations. Was it a thunderous beckoning from the heavens, a shower of rain hailing the springtime? The undulating OM sound seemed to originate from outside my window and permeated the walls, causing my entire being to quiver. I lay back taking in this amazing current, woken abruptly from my sleep.

And there She was in Her Splendorous form, the Goddess Tara, Her nila (deep blue colour) skin glowing in the semi-darkness of my room. The faint light from the lit diya (ghee lamp) enhanced her beauty as she stood to the left side of my bed, an arm outstretched towards me carrying a Munda, a skull in Her palm! My body was soaked in sweat from the shock and fear of Her presence. I sat up in bed and wiped the drenched sweat from my neck and breasts and with a trembling hand switched on the lamp by my bedside. The gentle strains of light from the lamp filtered through my room.

There was still a quaint trembling in my body. I found my balance and walked over to my Sacred Space in the corner of my room, which is my Temple, and knelt before her Immense Presence. I lit an incense of sandalwood and prayed in silence, tears rolling down my cheeks onto my naked thighs.

I felt almost like a zombie, in a trance, trying to convince myself of the beautiful darshan of Ma Smashan Tara……And so began my tryst with The Dasha Mahavidya Goddesses, The Ten Wisdom Goddesses……………and my whole life began to metamorphose. The realization of all my years of passionate sadhana seemed to be manifesting itself. My need to delve even deeper into experiencing Tantra, through meditation, Mantra yoga, and Bhakti yoga was beginning to make its mark on my inner process.

And Life was falling in love all over again, waking up each day to experience the ecstasy and passion in everything around me. This encounter with the Goddess was a complete shift from my dalliance with Shiva, whom I had been trying to woo through intense bhakti for several years.

One afternoon while stilling myself through meditation, I sought guidance from the Divine Powers to clearly show me the date when Ma would begin to connect with me. I asked my pendulum, “Show me a number when Ma will appear to me!” The answer was “9”, the ninth of April 2003! My mind began calculating, realizing the significance of this date. The entire configuration added up to a count of 9 (09.04.2003), which happened to be the date of the spring Navaratri and my destiny number. The same day a psychic whom I met asked me to wear a nine-faced (Nava Muhki) Rudraksha bead, which is ascribed to Goddess Durga, on my left arm. The journey was on!

Ma Tara in the Hindu Tradition

Some people tend to identify Ma Tara in the Hindu tradition with the Buddhist Bodhisattva Tara, as Tara is the dominant Goddess form in Tibetan Buddhism. While overlapping to some degree the two deities are different in depiction and energies. As a general term in Buddhism there are many forms of Tara governing the different aspects of life, indicating the grace and guidance of the powers of the Buddha Mind. She is the consort of the Bodhisattva Avalokiteshwara, who became Kwan Yin in Chinese Buddhist thought.

Ma Tara in Tantric Hinduism is a little different. Ma Tara is a Goddess of wisdom, the high priestess as it were. She holds the power of OM as the Taraka or cosmic sound vibration that takes us across the darkness of ignorance to the light of Self-realization. This connects Tara with death but as a power of transformation, the potential death of the ego. As such Ma Tara is a manifestation of Ma Kali as Kali-Tara. Tara is the second of the Dasha Mahavidya or ten great wisdom Goddesses that begin with Kali and manifest from her energy. The idea of the Goddess as the power who takes us across the darkness to the light is as old as the most ancient Rigveda. Tara is a manifestation of the guiding and protective force of the Supreme Mother of the Universe. In this regard she is the saving grace of Ma Durga as Durga-Tarini as well as Durga means difficulty and Tara the ability to takes us beyond these. Tara is one of the many forms of the Goddess as the Shakti of Lord Shiva who himself is also Omkara or the cosmic sound.

In Vedic astrology Tara means a star and is often regarded as the wife of the planet Jupiter, the guru among the Devas. Tara helps us overcome our negative karmas and bring in a positive Jupiterian energy of creativity, intelligence and contemplation. May Ma Tara bring all that is auspicious to you!

0 responses on "Inner Experience Leads Me to Ma Tara"