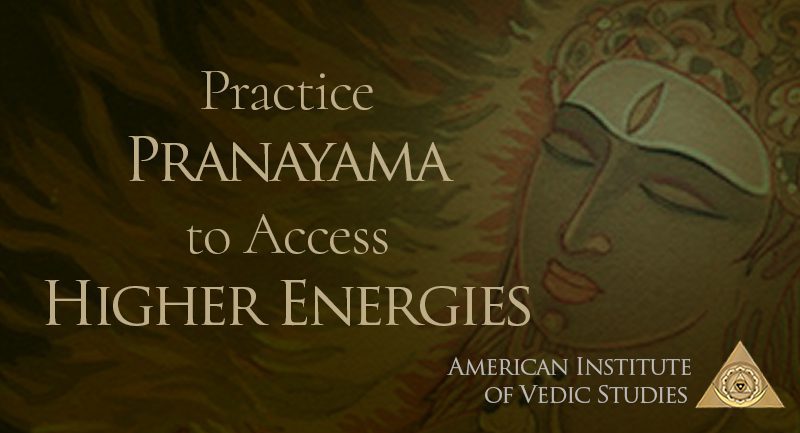 Pranayama is a very deep but often misunderstood aspect of Yoga. From ordinary breathing practices to yogic mastery of the vital force and promoting the higher energy of consciousness, it is all pranayama at various levels. In the following article, we will explore the deeper aspects of Prana and Pranayama, including how to achieve a unitary prana beyond the fluctuations of the ordinary breath, senses and mind.

In many classical Sanskrit texts, the term Yoga is used primarily for Pranic practices, while the term Jnana or knowledge is used for meditation. This is reflected in the teachings of the great modern sage Ramana Maharshi, who uses these terms in this manner. Many Yoga Shastras and Yoga Upanishads explain Prana and related factors of Pranayama, chakras and nadis in great detail. Sometimes the term Hatha Yoga is used for this Pranic Yoga and Raja Yoga for the Yoga of meditation. So Yoga and Pranayama are closely related and sometimes equated.

Prana is a word, much like the term Yoga, which has a broad range of indications and several different but interrelated levels of application. You may be surprised to find that Prana can mean much more than what you may have already thought it to be. These different meanings are not contradictory but complimentary. They help us bridge the gap between our ordinary breath and the highest energy of universal consciousness.

Prana in the higher sense is the spirit, the awareness that inhabits the body and mind, but transcends them. This higher Prana is much more than the physical breath. It is the great Prana, Mahan Prana, which is synonymous with the energy of consciousness, Chit-Shakti. This is the non-elemental, unmanifest Prana of the immortal life. It is inherent in Eternal Being or Sat and is above all biological functioning.

Pranic based Yoga practices aim to access this supreme Prana, though it is a process that can only occur by degrees, starting at a physical level. We should always remember that immortal prana as our ultimate goal of Pranayama practice. This is the Prana Purusha of the Upanishads, the Supreme Self, whose nature is the highest life energy beyond birth and death.

Prana can also indicate the cosmic creative force, the Ishvara, or Cosmic Lord, such as we find mentioned in the Yoga Sutras. Ishvara is the energy that creates, sustains and dissolves the universe. Our own individual soul or Jivatman can also be referred to by Prana, being the essence of our individual Prana. Jiva or the soul means Prana or life. This Prana of the soul is what allows us to take various births and to ultimately transcend the process of birth and death.

Prana is a cosmic force and pervades all of life and nature. Prana is not simply oxygen, which is but a carrier of prana at a physical level, but the very energy of life, and the basis of all other energies in the universe, including those that appear inanimate to us, like the force of gravity.

Yet it is the Prana that works within our own embodied existence that is the main concern for us. Most of us are first acquainted with Prana by its association with the breath. Often Prana is translated as breath or means breath. The breath is the main action of Prana in the body, and through the breath we can gain mastery over Prana at various levels, including accessing its higher forms.

Yet Prana is not merely the ordinary breath, it is the energy behind the breath. Pranayama practice is not simply breath work but moving to a deeper level of energy and awareness, accessing Prana at a level through, behind and beyond the breath.

Prana is also often regarded as the ‘vital force’ or ‘life energy’, which is sustained by the breath but pervades all bodily and mental activities. The vital force sustains speech, mind, the senses and our internal organs. Prana is the basis of Vata dosha in Ayurvedic medicine, the biological air humor, the most important of the three biological humors, which rules over all activities, functions and movements in the body, and is closely aligned with the nervous system.

The five senses are closely related to prana. The cognitive senses serve to take in various pranic influences, particularly the eyes and the ears, which take in the Prana of light and sound. But also the tongue, skin and nose.  The skin brings in both Prana and oxygen and conveys it through the sense of touch. The tongue takes in the Prana from the food. The nose takes in the Prana of fragrance, including subtler Pranas from the air than mere oxygen.

The motor organs work to discharge various pranic impulses as in speaking, moving, eating, elimination and reproduction, which are all pranic activities connected to our vital urges.

The mind has its own pranic connections, beginning with its connection to the senses, with our various associations and relationships, which form our own pranic network. Emotion itself is pranic energy within the mind, with its patterns of attraction and repulsion.

Yogic thought divides our nature into five sheaths, fields or enclosures (koshas). The first is that made of food (Annamaya Kosha), which consists of the gross body made up of the bodily tissues and organs.  The second is that made of Prana or Pranamaya kosha, related to the five Pranas and the five motor organs primarily. It governs movement, vital urges and the breath. Often the term Prana is used for the functions of the Pranamaya kosha.

However, the Pranamaya kosha is just the field of the outer or manifest Pranas, particularly those that interface with and energize the physical body. It is not synonymous with Prana as a whole. Prana operates in the deeper Koshas of mind (Manomaya Kosha), intelligence (Vijnanamaya Kosha) and bliss (Anandamaya Kosha). In fact, Prana in the deeper sense is often related to Ananda or bliss, which is the main power of creation and the main motivating force behind all aspects of life.

The manifest pranas are an expression of rajo-guna, the quality of agitation and turbulence. To reach sattva guna or a deeper peace and balance, we must calm and internalize the prana, which implies to calm and unify the energy of the breath. That is why Yogic Pranayama, like Asana, follows after the Yamas and Niyamas, the principles of sattvic living and rests upon them.

Pranayama often emphasizes holding the breath. The question here arises as to “what we are holding in the breath?” Some people may be holding negative emotions, fears, desires, or even ego energy in the breath. It is important to allow the breath to naturally deepen, so that there is a natural holding by the power of the inner Prana and awareness, not simply an ego effort. One should energize the breath with devotion, aspiration and a seeking for higher knowledge. Above all, one should not think any harmful thoughts about anyone while doing pranayama.

The goal of yogic pranayama is not simply to exercise the lungs and make us breathe better, though these are a natural part of it. The goal is to develop a ‘unitary prana’ in which the fluctuations and disturbances of the breath cease and one can access the inner energy of consciousness beyond the breath. This unitary Prana or breathless state is called ‘kevala kumbhaka’ in yogic thought. It is often practiced along with yoni mudra, closing all the sensory openings in order to access the inner light. It is the fruit of extensive Pranayama practices or mastery of the Prana.

Kundalini can be defined as the higher energy of the unitary prana. To access it, we must first balance the breath between the Ida and the Pingala or the left and right nostrils, the lunar and the solar currents. This implies taking our minds to a state of unitary attention and unitary awareness beyond the mind’s dualistic fluctuations of attraction and repulsion, like and dislike, love and hate.

It is only the unitary prana that can enter into the Sushumna or the central channel and opens the chakras, unfolding their powers.  As long as we are caught in the dualistic prana, the Kundalini lays asleep and dormant at the base of the spine, and the chakras are closed, working only at outer level to sustain our outer existence, not affording steady access to higher states of consciousness.

One can activate this unitary prana directly through the unitary awareness if one has the ability to create a strong focused meditation, but that is relatively rare. Only a few Yogis along the Yoga of knowledge are likely to have this power.

The Pingala nadi that flows through the right nostril has a solar, heating, fiery and Pitta nature. It is stimulating and promotes movement, expression, action and digestion. The Ida nadi that flows through the left nostril has a lunar, cooling, watery and Kapha nature. It is calming and promotes rest, introversion, relaxation and sleep.

The practice of alternate nostril breathing, done with concentration and part of a sattvic life style, helps balance the breath and develop the unitary prana behind it.

After the practice of alternate nostril breathing, if done correctly, one can for a time enter in the flow of the unitary prana, in which inhalation and exhalation come to an end, or become very subtle. This is generally experienced as a flow of energy in the region of the Third Eye, a kind of light, pressure and vibration emanating from that location but expanding to pervade the entire body. One can learn to work with and direct this unitary prana through the various nadis and chakras or out of the body altogether.

This is a simple method of combining mantra with alternate nostril breathing.

In Sanskrit symbology, the breath is governed by s and h sounds. This is common to many languages, but perhaps nowhere stressed so much as in Sanskrit. Especially the sounds Soham and Hamsa are used relative to the breath. In this special method, one can use both Soham and Hamsa relative to alternate nostril breathing.

During this practice, one should let the breath naturally deepen. There need be no overt effort to hold the breath but if this occurs naturally it can be allowed.

After one has done this practice for fifteen minutes or more, one should let go of the breath and enter into yoni mudra, or simply just sit quietly with the eyes closed, allowing the background unitary prana to come forth.

The more one practices this alternate nostril breathing, the greater the access to the unitary prana, which will gain in strength even behind the ordinary breath. Begin with at least fifteen minutes morning and evening.

But remember to keep a peaceful prana in all that you do. Then all your pranayama practices will work in the best possible manner. The higher Prana is a power of peace, not a power of self-assertion! This unitary prana is best accessed through a deeper peace and surrender of our personal will to the Divine will, and an alignment with our highest Self.