The Aryan-Dravidian Divide Is A Political Myth 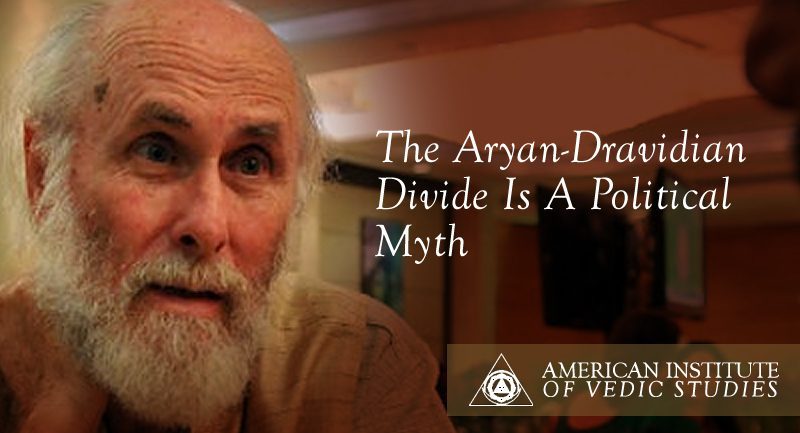 Traveling throughout India, including much time in the south, I have been trying to make sense of the proposed Aryan-Dravidian divide, and the call for a pure Dravidian culture that one hears in Tamil Nadu.

The first thing one notices is that the most pure Sanskrit names are found in Tamil Nadu, extending to Dravidian political leaders like Jayalalitha and Karunanidhi. Yet this is just the beginning of numerous connections between the culture of south and the north.

In the south one finds the largest Hindu temple complexes, dwarfing anything in the north. Yet the temples are of the same great deities as Shiva, Vishnu, Devi and Ganesha as in the north. Southern temples reverberate with the same Sanskrit chants, as in the north, with some chants in Tamil as the north has some in Hindi.

Dravidian nationalists tell us that Lord Shiva was a Dravidian God expropriated by the northern Aryans. Yet Shiva is the great deity of Varanasi, Kashmir, Kedarnath and Kailas in the north, with the Ganga flowing down his head as a Himalayan God. Varanasi is said to be one of the oldest cities in the world.

The great Vedantic teachers over the last 1500 years have come from the south: Shankara of Advaita Vedanta (non-dualist), Ramanuja of Visishtadvaita Vedanta (qualified nondualist) and Madhva of the Dvaita Vedanta (dualist) school.

If one does pilgrimage to the Char Dham in the north – the four Himalayan sacred sites of the Hindus – one learns that these great shrines were renovated by Shankara, the great Vedantic guru of Kerala. Priestly families from the south run many Himalayan temples, as in the case of Badrinath today, where the Rawat or chief priest must be chosen from certain Kerala families.

Sanskrit learning is best preserved in South India. Many of the Sanskrit chants used in Hindu rituals throughout India are those of southern teachers, starting with Shankara from Bhaja Govindam to Ganga Stotra.

Of course, Tamil and Sanskrit are very different languages, but both have been used together in South India for as long as recorded history, sharing common scripts like the old Grantha script from which the modern Tamil script arises. Grantha in turn arose from the Brahmi script of North India, which reached Sri Lanka over 2500 years ago. Sanskrit has been used side by side with Tamil since as long as we can trace the history of the region.

South India as the Bastion of Vedic Culture

Many great Vedantic teachers of modern times have come from the south including Swami Dayananda (Arsha Vidya), Swami Chinmayananda and Ramana Maharshi.

If one wishes to study traditional Ayurvedic medicine, one will discover the most authentic traditions in the south, which has an entire tourist industry based upon it. Aryan or Hindu culture is much more alive in the south, including traditional dance or Bharat Natyam. Even South Indian movies more commonly depict Hindu stories and deities than do the Hindi movies of the north dominated by the Khans.

Behind this Aryan-Dravidian divide idea is the historical debate whether the so-called Aryans invaded or migrated into India from the north and pushed the Dravidians to the south – as western historians have proposed (supposed to have happened around 1500 BC). This theory is under severe scrutiny today and has no real evidence on the ground to prove it, including no Aryan race type ever discovered archaeologically – but even if it has some validity it is an event, more than three thousand years old. It is hard to see its relevance as defining Dravidian versus Aryan culture today.

The origin of the Aryan-Dravidian divide idea had a lot to do with the people of South India throwing off the rule of the old Brahmin class which, incidentally, happened in the north as well. Yet we must remember that these were their own local Brahmins, who had been living there for many centuries, not any recent group of migrants from the north. To identify local Tamil Brahmins today with descendants of proposed Aryan invaders of thousands of years ago has little credibility, except as propaganda.

Others raise the issue of skin color, which was the old basis of the now disproved Aryan and Dravidian races. Not surprisingly people in the more equatorial south of India are darker in skin color than those in the north, though north Indians also are usually dark in complexion.

Some have tried say that the caste system was racially based on placing darker skinned Dravidians at the bottom and lighter-skinned Aryans at the top. But traditional castes in India as Brahmin, Kshatriya, Vaishya and Shudra were defined by occupation like the nobility and priestly classes of Europe, not by ethnicity. Such racial theories cannot be found in India texts before the colonial era and its racist view of the world.

There is little in so-called Dravidian culture, ancient or modern, that does not have strong connections with so-called Aryan culture. The Aryan-Dravidian divide is largely a modern political construct. The culture of South India has been intimately woven with Sanskrit, Vedic philosophies, Vedic culture and Yoga as long as we can trace it.

Certainly there are cultural variations in India, including between the north and the south, just as there are in Europe or any subcontinent. But there is clearly a common culture that goes back many centuries and cannot be divided by Aryan versus Dravidian theories.

This article by Dr David Frawley was first published by Swarajya

Santosha, the yogic state of contentment, is not ordinary contentment, such as being happy personally with who are, what we own, or having our desires fulfilled. It is not mere complacency or being satisfied with outward enjoyments. Santosha is the contentment and peace that arises from dwelling in our