The Devatas (Gods and Goddesses) as Forms of Brahman 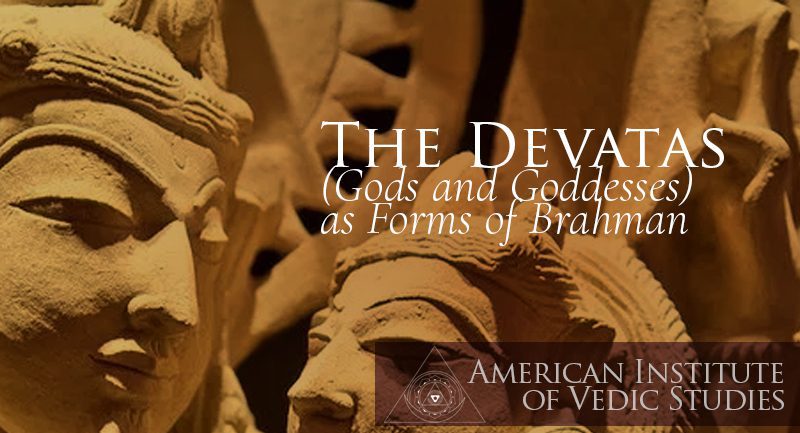 Hindu Gods and Goddesses, more properly called Devatas or Divine principles, are usually treated by modern scholars in a superficial sense as powers of nature or as imaginary spirits of the primitive mind.  Or at a psychological level they have been reduced to expressions of human emotions or sexual energies.

At a yogic level, for those who have an inner vision, understand the language of mantra,  and have real devotion, Hindu Devatas are aspects, forms or manifestations of God or Ishvara, the Cosmic Lord and Creator, representing his powers, qualities or various ways of imagining him. They are the principles of Bhakti Yoga.

Yet at what may be a yet higher level of Self-realization, the Hindu Gods and Goddesses are forms or aspects of Brahman, the impersonal Godhead behind and beyond the manifest universe. They are powers of Jnana Yoga or the Yoga of knowledge.

Vedic Devatas appear as forces of nature and light, while the Puranic Devatas are more anthropomorphic in form and appearance. Yet this is but the surface of multidimensional meanings.

The four main Vedic Devatas are Agni, Vayu/Indra, Surya and Soma. As light forms in nature these are fire, wind/lightning, sun and moon. Yet these are further explained as analogues for the formless Brahman.

One could state that the Vedic Devatas are more forms of Brahman than they are forms of Ishvara or God in the personal sense with their connection to the forces of nature rather than human personalities. Yet of these four Vedic Godheads, it is Indra, whose name like Ishvara means ‘the Lord’ that is the closed to God. However, Indra is also Brahman as the supreme power of consciousness, knowledge and perception. Indra is the Purusha as the seer and the knower as the Aitareya Upanishad proclaims.

The Puranic (later Hindu) Devatas, like the great trinity of Brahma, Vishnu and Shiva, are the three forms of Ishvara, God or Saguna Brahman, Brahman with qualities. The three are the Creator (Brahma), Perserver (Vishnu) and Dissolver (Shiva) or the three aspects of Ishvara relative to the gunas of rajas, Sattva and tamas.

Yet of the three, it is Shiva that is the closest to Brahman. In this regard, Lord Shiva is Nirguna Brahman, beyond all manifestation, Lord Vishnu is Ishvara, God or Saguna Brahman as the ruler of the universe, and Lord Brahma is Mahat Tattva or cosmic mind.

Shiva is the personification of the supreme Brahman and also is impersonal. He is the formless, transcendent, pure consciousness, pure existence, and peace – not at all concerned with anything in the realm of time and space, birth and death. He is beyond good and evil and can embrace all suffering as well as all joy. He is unpredictable and paradoxical, and does not conform to the expectations of his devotees. He works to take us beyond any limitation that we would put upon him or upon ourselves. He demands that we surrender our limited mind and ego to the Absolute.

Similarly, of the three great Goddesses and consorts of the three great Gods, Sarasvati of Brahma, Lakshmi of Vishnu and Kali of Shiva, it is Kali that is the closest to Brahman and a personification of it. Kali is Brahman’s supreme power or unlimited Shakti – the power of pure power of existence, which as the infinite and eternal exists behind space and time. Kali’s often terrible appearance signifies this transcendence that breaks down all the appearances and limitations that we are attached to. Her garland of skulls shows her ruling over and transcending of suffering, time and death.

Kali symboliz  the calming and silencing of the mind (nirodha in the Yoga Sutra sense, nirvana in the sense of Buddhism and the Gita). She is the prana merged into itself, the ending of death in the ending of birth! She is the breath of Brahman that occurs without wind or any external changes, a continuous state of transformative Being.

Shiva and Kali are only vaguely defined personalities. They represent the impersonal in its first manifestation turning towards personality. They exist before and beyond the manner and rules of personal expression. They break down the personality into the infinite. That is why their forms do not conform to any rules, order or stereotyped patterns. They represent the transcendent, which from the standpoint of the manifest or phenomenal world must be paradoxical, beyond all dualities, cataclysmic and transformational.

Vishnu and Lakshmi represent the Divine in its orderly manifestation in the manifest world and its highest Sattva guna. Shiva and Kali relate to pure existence. Shiva and Kali take us back to Brahman and themselves merge and disappear back into it. They are light and energy as the most primal forces, the peace and power of the infinite.

To see the Devatas (Gods and Goddesses) as forms of Brahman is to truly see the Devatas. Each Devata is a doorway on the infinite which is Brahman. Each indicates a path beyond form and personality through reflecting a primal form, power or personality. Each represents a way to understand our own deeper Self or Atman.

The Devata works to take us to Brahman by expanding our personality into the impersonal, our individuality into the cosmic. They do this through their own personality which is a personification of the infinite. The Devatas work on all levels of existence in order to lead us to that Being which is everywhere.

In that Brahman, the Self, the Devata, God, the Guru and the world, all merge into one. The waves fall into the sea. The rays return to that one light. That formless Brahman is present as the Being in everything from a particle of dust to the Sun, Moon and stars. Then we see that each thing becomes a Devata or deity and we understand the Devatas or Divine currents working in the forces of nature, of light, time, space and the yearnings of the human heart.

Note an expansion of this article in the book of David Frawley: Inner Tantric Yoga: Working with the Universal Shakti.