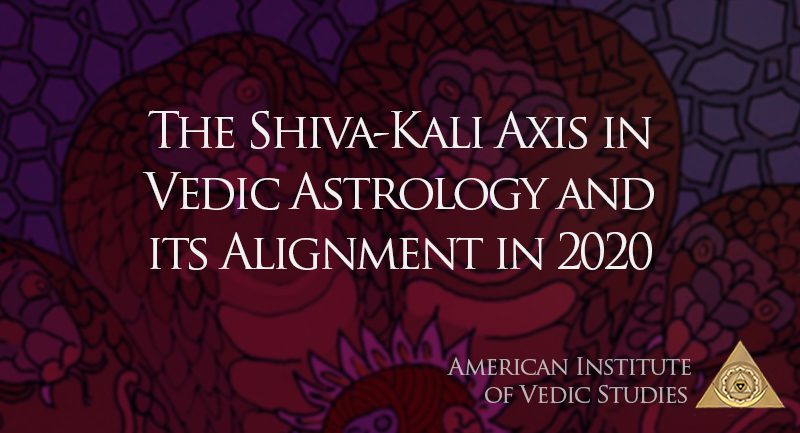 The Shiva-Kali Axis in Vedic astrology is the important axis between the Galactic Center in early Sagittarius (Kali) and the point opposite to it or the Anti-Galactic Center in early Gemini (Shiva). It marks the two sides of the zodiac from looking inwards from our solar system towards the center of the galaxy in Sagittarius to looking outwards from the center of the galaxy from Gemini (Orion). It contains many secrets of creation and destruction, karma and transcendence.

The Galactic Center falls in Mula Nakshatra, which marks the first 13 degrees 20 minutes of the sign of Sagittarius. Mula is ruled by Ketu as a planetary influence, the south node of the Moon, also called Dragon’s tail or tail of the serpent. The headless body of the serpent symbolizes its powerful energies of death and transformation. Mula’s presiding deity is Nirriti, which means negation or calamity, but also Mula means the opposite as well, the root or the origins. Relative to this duality of creation and destruction, Mula relates to Kali, the Goddess of Time who rules eternity as well.

Mula relates to Adya Kali as the origin, the Mother of the Universe and ultimate creative force. It connects to the Muladhara or root chakra at the base of the spine and to the Kundalini Shakti, the serpent power. Both sides of manifestation/creation, and dissolution/destruction are contained within Mula. Mula is the ultimate abode of Shakti in the zodiac.

Ardra is the Nakshatra of Rudra or the fierce or destructive form of Shiva. It is ruled by Rahu, the north node of the Moon or head of the serpent or Dragon opposite Ketu in meaning. Ardra refers to the storm and rain in which the thunder and lightning is released. At a higher level this thunder is also the cosmic sound OM. Rahu is the cut off head of the Serpent, which with Ketu together form the complete body. Serpents symbolize electrical energy, prana and Shakti in Vedic thought, both as creative and dangerous, transformational and hard to control.

We can better understand these astrological influences when we remember that Gemini in the zodiac also related to Orion as a constellation which is located immediately below it in the northern sky. Ardra specifically relates to the star Betelgeuse or the red giant star in the left arm of Orion, which is Rudra’s star as Rudra also means red. Betelgeuse marks the point opposite the galactic center and the boundary between Ardra and Mrigashira as Nakshatras.

Mrigashira’s presiding deity meanwhile is Soma or creative form of Shiva ruled by the planet Mars. Mrigashira is portrayed as the head of a deer, pierced by the arrow of a hunter (figuratively seen in the three stars of Orion’s belt). Symbolically, Mrigashira relates to the human head and the crown chakra, including the head that is cut off or the mind that is transcended in higher Yoga practice.

Yet Soma is also the bliss principle and nectar of immortality that we are all seeking and hunting for. What is the nectar of the Gods is poison for mere mortals. The bliss of the Gods can be a poison to mortals who do not want to give up their mortality in order to become immortal. These two Nakshatras relate to Lord Shiva’s two aspects of creation and destruction, much like how the two aspects of Kali as creation and transformation occur in Mula.

The Galactic Center, therefore, is the point of the Mother, the place of origins where the largest ad most concentrated mass of stars exists in the galaxy, but which is also the point of return. The anti-Galactic center is the place of the Father, looking out into boundless space beyond the formed worlds of the galaxy and all limitations.

This Axis of the Galactic Center and the point opposite is the Kali-Shiva axis. It is the most powerful place of karmic rectification and transformation in the chart. It is also the main Ketu-Rahu axis in terms of ruling planets. The energies flow back and forth between these two points in various interconnected manners. The cosmic energy comes into the galaxy through Ardra to its ultimate concentration in Mula at the galactic center.

Rahu and Ketu: The Eclipse-Causing Nodes of the Moon

Ketu in Vedic astrology indicates Moksha or the liberation of the soul beyond all birth, death and sorrow. It provides deeper insight and knowledge, including that of astrology, through focused concentration and insight, one-pointed awareness. Yet Ketu also indicates very deep-seated ancestral karmic patterns. As a point of death and destruction, its energy is concentrated and very difficult to handle. Its energy is contracting, taking everything back to a single point. For the ordinary person this contraction is more destructive than spiritual, bringing in doubt and negativity to the personal and collective life.

Rahu meanwhile indicates the forces of Maya or illusion behind the world. Yet it holds a powerful creative energy, with Shiva and the Lord of Maya. Rahu causes disturbance, fantasies and confusion, but also provides immense vision and creativity if controlled. Its energy is expansive, moving out beyond all limitation, which aids in transcendence, but for the ordinary person can push them beyond their limits, expanding ego and desire to the point where it bursts. As always opposite to each other, Rahu and Ketu energies are always connected. Both Shiva and Kali rule over and control their powerful serpentine energies.

In 2020 Ketu and Rahu are transiting the Nakshatras of the Galactic Center and Anti-Galactic Center, which they also rule over, with Ketu in Mula and Rahu in Ardra followed by Mrigashira. This means that the Kali and Shiva energies are getting aligned in a powerful manner. This alignment is both positive and negative, pushing us into not only difficulties but to transformation.

Yet these two energies, destructive and transformative, are connected and ultimately one. This powerful Kali-Shiva energy is not easy for the ordinary humanity to handle. It leads to disturbances, unrest and calamities, like a powerful electric shock. Yet for the more spiritually evolved who can handle this energy it provides a deeper energy for insight and realization, going back to our origins in the transcendent.

In other words this Kali-Shiva alignment can bring out the most difficult karma or allow us to transcend karma. It brings out the background karmic energies behind our lives, including deep-seated collective karmas, but also can awaken our deeper sadhana or spiritual practice and aspiration to go beyond time and death. It is like a collective Kundalini Shakti force that is disturbing to the ignorant but can be enlightening to the wise.

It is imperative in the time of this difficult Ketu-Rahu alignment with the Galactic Center that we worship Shiva and Kali both outwardly and inwardly. We must recognize the deeper spiritual forces behind our physical lives, which are but their shadows, including the ultimate unity of the forces of creation and destruction as a single Shiva-Shakti energy. We must look beyond death to immortality like Mahamrityunjaya Shiva.

We must look beyond karma and desire to our soul’s purpose of evolving in Consciousness to Self-realization. All outer shocks in life are meant to push us in this inward direction. If we fail to turn within, we will be disturbed by the stronger psychic energy stirring up deep-seated collective karmas, which can use destruction to force a long-term inner awakening. The choice is ours.