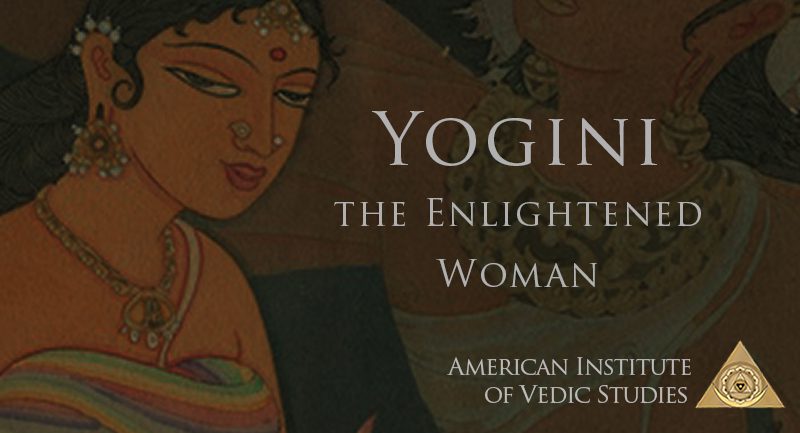 “Aham Prema”
I am Divine Love

In Bhavani-nama-sahasra (the Thousand Names of the Goddess Bhavani) as beautifully explained by Pandit Jankinath Kaul, “A Yogini is one who is possessed of magical powers.” Para Shakti, the Supreme Shakti, in the form of Durga is given the name Yogini. She assumes various forms and takes on different divine energies to maintain harmony in the Universe, to combat evil and uphold the good. A woman who gains a transcendental state in sadhana comes back as a celestial Yogini or Bhairavi, a female adept at Yoga. She carries the energy of Durga within her.

A true Yogini is an enlightened woman with exuberant passion, spiritual powers and deep insight. Yoginis communicate a sense of freedom, a sheer mastery in whatever they do. With their compelling gazes, they can hypnotize even a great yogi and are capable of changing their shapes at will. Tantric scholars have written about Yoginis as independent, outspoken, forthright women with a gracefulness of spirit. Without them, yoga can fail in its purpose and remain sterile.

Shakta texts honor both women and the Earth alike as sources of energy, vitality, physical and spiritual well-being. Noting this analogy between a Yogini and the earth, an eleventh-century Tibetan Cakrasamvara commentary states: “Having recognized a Yogini who will delight and transmit energy and power to him, and feeling passionately attracted to her, if the male aspirant does not worship that Yogini, she will not bless the yogi, and spiritual attainments will not arise.”

In Hindu thought, the Yogini represents the Yoga Shakti herself, the Kundalini, as well as the resident powers or female deities of the different chakras. The Yogini possesses the power of Yoga herself and can awaken that in others, not only generally but at any point or place in the body or mind. A man’s ability to achieve the higher states of Yoga can be facilitated by his association with such a female companion who reflects this energy.

The Shambhavi form of the Goddess

Just as a Goddess blesses and benefits her devotees, and the Shakti vivifies all biological, cultural, and religious practices, so a woman can channel this life force or spiritual energy to her consort-devotee. A woman is no more depleted by providing this spiritual nourishment than a mother by nursing her child. In fact, it causes deeper energies to well up from within her.

This spiritual energy is not something that a man can extract or take from a Yogini at will. She chooses when and on whom to bestow her blessings. Her ability to enhance a man’s spiritual development depends upon her innate divinity as awakened and brought to fruition by her own yogic practices, which include envisioning herself in the forms of various Goddesses and investing herself with Their appearances and ornaments, tender and wrathful expressions, and supernatural powers for liberating beings. By conferring energy and grace upon a man – ”blessing ” or ”empowering” him – she is not weakening herself but rather sharing her energy voluntarily with one who has won her favour by meeting the various requirements that she may impose.

This relationship parallels human-divine relationships in so far as the deity is the benefactor and the human devotee is the beneficiary. Although the Deity may derive some gratification from the relationship, the devotee has much more to gain than does the sovereign object of his devotion. What supplicants ultimately want from their deity is supreme deliverance or liberation, and this is what male Tantrics should seek to gain from their relationships with spiritual women. Tantric texts reiterate that a man cannot gain enlightenment without respecting women and allying himself inwardly with a woman. The woman’s beneficence is a gracious, yet voluntary response to her devotee’s supplication, homage and worship.

The Goddess is a great Yogini, devoted to Shiva, yet matching His powers. She is the embodiment of pure energy, the Mother and matrix of all manifestation, the source of all time, space and creation. As they practiced Yoga together, Shakti accepted Shiva as her Guru, and he taught her the ways of transcendent being to guide her to her ultimate liberation. Shiva in turn also accepted Shakti as his Guru, and she initiated him into his ultimate liberation through putting him in touch with the supreme power of consciousness.

Powerful Forms of the Goddess

The Goddess Chhinnamasta, the deity who cuts off her own head, symbolizes the great Yogini, the wonderful consciousness beyond the mind. She represents the opened Third Eye from which flashes forth the lightening of direct perception that destroys all duality and negativity. She is the Yoga Shakti or power of Yoga in its most dramatic action of granting enlightenment. Hence she is also known as Vajra Yogini. The Vajra is the supreme lightning force of the inner Self.

Chhinnamasta is the Para-Dakini, the supreme or foremost of the Dakinis, the attendant Goddesses on the yogic path, who are the yoginis as the powers of the chakras. Sadhakas seeking the path of occult or yogic powers should worship her, as reiterated by David Frawley in his book Tantric Yoga and the Wisdom Goddesses, invoking her through the mantra based on her name as Vajra Vairochani. This facilitates all inner transformations in a dramatic way.

The Yogini is also Bhairavi or the Goddess of Fire below in the muladhara or root chakra. It is she who becomes Chhinnamasta as she reaches the third eye and opens the crown chakra beyond. Her blood is light that illumines everything.

Mary Magdalene was such a Yogini, manifesting her Shakti through the flow of light from her heart and soul. Her Divine love was unconditional and independent of external situations and dogmas. Yet Divine love is not limited to the ascetic. In my understanding of Tantra, if two spiritually evolved beings come together in unconditional love, they also can create an energy field that is most positive and rare, exuding high vibrational levels of peace and love into the universe.

The ancient cultures of Egypt, Greece, Tibet and India have esoteric traditions glorifying the initiatory power of the woman. She is considered to be the high priestess who unfolds all higher knowledge and powers for us. She is Sophia, the source and font of wisdom or Prajna, the deepest insight into the nature of things. Tantric teachings stress the importance of physical beauty in a companion but only to initially stimulate and then elevate passion from the sensual to the spiritual plane. The beauty of the soul surpasses physical beauty.

The ‘initiatory’ power of woman is tremendous, providing the force of passion that is necessary for developing experiential mysticism. By sharing the secrets of love, a woman can bestow transcendental power on her lover. The highest form of Shakti is the direct expression of the wisdom-energy she releases, creating a joyful transformation. A woman can initiate her partner into such mystical experiences through trust, surrender to higher ideals and spontaneity. It is the Goddess within each woman who really initiates.

To be a Yogini is the highest spiritual goal for all women. It is the way to become one with the Goddess within and to bring her out in expression to uplift the world that is really her creation. Yet it is not an outer appearance but a state of inner energy and ecstasy that makes the Yogini. She cannot be manipulated, defined or even ever entirely known.

From the book, Yogini, Unfolding the Goddess Within, by Shambhavi Chopra