Rama and Sita through a Yogic Vision 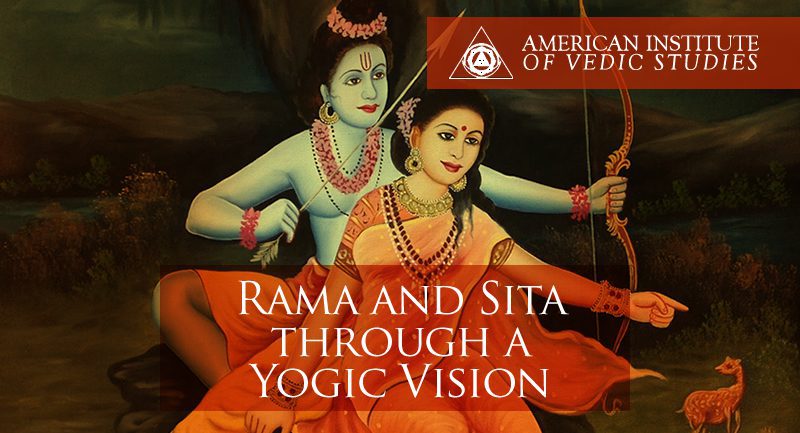 Sri Rama is the avatar of Dharma. His rule of Ram Rajya is the rule of Dharma over the entire world, centered in India and Ayodhya, his place of manifestation, but relevant to everyone.

Sri Rama is much more than an historical person. He represents the inner connection of humanity to the universal Self, Paramatman. Sita Devi is not a merely an extraordinary woman but the universal creative power manifesting through all of nature, Parashakti. Without understanding these deeper meanings, we will misinterpret the magnificent story of the Ramayana.

Human life, though karmically bound to physical reality, is part of an infinite consciousness working through the whole of life. Developing that unbounded Self-awareness and its complementary compassion is the real teaching behind the sacred depictions of Rama and Sita and their magical life story.

Sri Rama’s birth is not just an event in time but represents an eternal potential within us coming forth, our connection to the Supreme Dharma within us. It is a doorway from the realm of time to the timeless.

Sita and Rama as the Dual Cosmic Powers

Trying to understand Rama and Sita in mere human terms reflects a limited perception and bondage to the realm of outer appearances. This does not mean that Rama and Sita had no human existence, but lived as incarnate manifestations of the transcendent reality.

Rama and Sita are not  two separate individuals. Sita is Rama’s feminine counterpart, like Shiva and Shakti, Vishnu and Lakshmi. Their physical manifestation reflects a deeper unity between the two. They are like the Sun and Moon, fire and water, earth and sky, consciousness and bliss. Their energies are all pervasive within and without, holding the entire fabric of existence.

Rama and Sita are prominently mentioned in India’s ancient history in the solar dynasty of kings and sages. Yet Rama and Sita are an essential part of the greater history and culture of India and Asia, now extending to the entire world. The Ramayana is asking us to awaken a poetic and yogic insight, like the Vedic Rishis, in a magical story that appeals to young and old alike, and embraces all nature and humanity.

The Role of Sita

The Ramayana revolves around Sita. Who is Sita? Sita is born of a furrow in the ground. She is one of the ayoni-jas or those not born of the womb. She is discovered by King Janaka during his yearly ceremonial plowing of the fields. Yet King Janaka is not an ordinary king either. He was the greatest philosopher king (Rajarshi) of ancient India, equal to the Rishis. The Upanishads contain his profound dialogues with the sage Yajnavalkya.

As King Janaka’s daughter, Sita’s character embodies an exalted philosophical and creative refinement. Sita is related to Sarasvati as the supreme muse of artistic inspiration, to Lakshmi as the capacity to nourish all creatures through the Earth, and to Parvati as the Yogini who can renounce and transcend all limitations. The Atma Shakti or power of consciousness that Sita holds arises from the receptive and silent mind, which is far beyond any outer powers born of self-assertion or material becoming.

The loss and regaining of Sita is our loss and finding the knowledge of our true nature. Lakshman is the discriminating power of the buddhi that protects this inner receptivity. Rama is the true Self (Paramatman) within us that must awaken to reclaim it. Hanuman is the son of Vayu, the cosmic energy that works through the air element. He is our inner prana devoted to the Divine couple, the Sita and Rama within us. Ravana represents the separative self and its illusion powers through the ego-mind, obsessed with external power and control.

To honor Sri Rama we must strive to live a life of dharma and sadhana. We must be open to the space of cosmic consciousness beyond our biased human intellect and its conceited opinions. We must honor the role of Sita and make our lives into a vision and a sacrifice. We must sharpen our intellect as Lakshman to discern the eternal from the transient. We must awaken our inner Hanuman and direct our prana to leap beyond all outer limitations. We must overcome our own inner Ravana, the intractable ignorance and ego urges within us.

A New Vision of Ayodhya and Ram Rajya

We all arise from Ayodhya, the divine city of the cosmic dharma, and must eventually return to it. We must move from an outer fixation on the physical body to an inner view of life as an endless expansion of unbounded awareness Ayodhya is the supreme abode of profound wisdom, deep devotion and unity consciousness within us. Ayodhya as the city of dharma is an ideal within the hearts of all that welcomes every creature and honors every form of sincere aspiration. Sri Rama as the avatar of Dharma exemplifies that our true duty is to serve all life, not merely to fulfill our personal desires. We have much to learn from his life, but must approach it with humility and discernment for its transformational secrets to unfold. These are revealed not when we analyze it by the mind but when we perceive it at the core of our being, the spiritual heart (hridaya), which is also Ayodhya.

With Ram Janmabhoomi being rebuilt in Ayodhya today, the promise of a spiritual regeneration for humanity, starting in India, is arising again. Naturally new Ravanas will be there to challenge tit. But India after 75 years of independence has come far from the dark period foreign domination to an independent voice and its own prominence on the world stage as the oldest and most profound civilization and now the largest democracy as well. May the birth  of Sri Ram celebrated today be the basis for a New India and new humanity attuned to its cosmic origin and goal, developing not only our outer potential our highest aspiration to the Supreme Light.