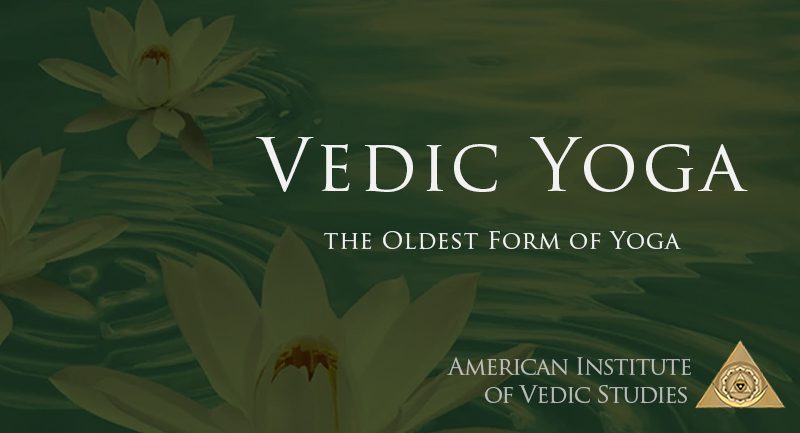 Vedic Yoga is the oldest form of Yoga dating back to the Rig Veda, which is perhaps the oldest book in the world. It is the oldest Sanskrit text and the oldest work in any Indo-European language. According to the great Yogi Sri Yukteswar, guru of Paramahansa Yogananda, Vedic teachings date back to Satya Yuga or Golden Age over ten thousand years ago.

According to the Vedic view, humanity was one in language and religion during the Golden Age. Human beings possessed an innate contact with the Divine Self within and also had telepathic powers and photographic memories. This made books and other media unnecessary. Religious institutions were also not required and no technology was needed either. Human life was spent in Sadhana or spiritual practice and human consciousness freely moved through the domains of cosmic consciousness, remaining in harmony with both nature and the Spirit.

At the end of the Golden Age, human spiritual intelligence began to decline. Differences in language along with the growth of the ego brought about an increase of ignorance and division between people. At this time the Vedic teaching was first compiled in an oral tradition to preserve the spiritual knowledge developed in the Golden Age.

The Vedic Yoga was created by numerous Vedic seers of the Angiras and Bhrigu families, of which the most important are the seven great seers Vasishta, Vamadeva, Bharadvaja, Gritsamada, Vishwamitra, Kanwa, and Atri. Through the vision of the Rishis, the Vedas set forth all the main possible spiritual paths for humanity. The Vedas contain a comprehensive key to cosmic evolution as well as to human spiritual unfoldment, unlocking all the laws of the universe.

Vedic language employs powerful mantras to set forth this teaching that have many different levels of meaning and application. In this regard the Vedic language has a depth and dimension that modern languages, products of the outer mind and ego, cannot approach. Vedic mantras reflect the pattern of cosmic law and the blue print of cosmic intelligence, through which all that exists can be comprehended in ones inmost consciousness. Vedic mantras contain the prototypes of all knowledge and all powers of creation. Yet to understand and use them correctly requires a special insight. Vedic mantras cannot be grasped by the ordinary intellect, which is why academic renderings of the Vedas are almost useless and breed many distortions.

The basic Vedic Yoga is threefold and has several important correspondences:

Mantra Yoga involves developing Mantra Shakti, the power of mantra, through which the mantra becomes alive as a tool of transformation in the mind. From this arises Mantra Sphota, mantric insight, through which the inner meaning of the mantra can be grasped, linking us up with Divine laws. This allows us to understand all forms in the universe as manifestations of the Divine Word, the creative vibration OM. This mantric force sets in motion all other inner energies, not only on an inner level but can also provide mastery over all the forces of nature.

Prana Yoga involves developing Prana or Vidyut Shakti (lightning or electrical force), and Pranic insight (lightning perception). This allows us to work with our vital energy as a manifestation of the energy of consciousness. Mantra becomes Prana as Prana (breath) itself is unmanifest sound. This Prana provides the impetus and vitality for inner transformations.

Dhyana Yoga, or the Yoga of meditation, involves developing Buddhi or awakened intelligence, called Dhi in the Vedas, and its power of truth perception. This allows us to understand the universe and the human being as integral unfoldments of Cosmic Intelligence. This higher intelligence arises through the energization of speech and Prana and brings an extraordinary transformative power into the deepest level of the mind. In Dhyana Yoga the light of truth floods the mind and we come to know the unitary nature of all reality.

The Three Yogas relate to our three basic faculties of speech, Prana and intelligence dominated mind (Buddhi-predominant Manas). These are not just our ordinary faculties but our ability to develop the Divine Word, the Divine Life and the Divine Mind within us. They relate to the three bodies, the physical, astral (Pranic) and causal (soul or deeper mind).

The three main Vedic Deities or Devatas correspond to the three types of light. Agni is fire, which is heat or thermogenic light that burns up all negativity and reformulates our nature on a higher level. Indra is lightning, which is light energy or electrical force through which we can ascend and move on a higher level of being. Surya is the Sun, which is pure light or magnetic force that draws us into the omnipresent infinite.

These three forces operate in our three states of waking, dream and deep sleep, and can transform them into states of Divine waking or perception, Divine dream or creation, and Divine rest or peace. These are the three worlds of Earth, Atmosphere and Heaven, not as external but as internal realities, through which we can grasp all the worlds as formations of our own mind.

The threefold Vedic Yoga is a little different from the classical eightfold or Raja Yoga taught by Patanjali in the Yoga Sutras. In the Vedic Yoga the yamas and niyamas, the observances and restraints that constitute the first two limbs of Raja Yoga, are part of the Dharmic foundation of Vedic life. This means living according to our higher nature and keeping our lower nature in check through right values, right effort and right diet. Asana or yogic postures, which is primarily a comfortable sitting posture, is not a separate limb of the Vedic Yoga.

Vedic Mantra and Prana Yogas include Pranayama, control of Prana, and Pratyahara, control of the senses, of the Raja Yoga system. Pranayama consists of developing Pranic energy, while Pratyahara consists of withdrawing it from the senses and motor organs. Mantra allows us to direct both Prana and mind. Vedic Dhyana Yoga includes Dharana, Dhyana and Samadhi, concentration, meditation and realization of Raja Yoga, which are the three aspects of merging the mind back into the Divine Self.

The Vedic Yoga begins with mantra as its foundation, using mantras from the Vedas, particularly those of the Rig Veda. These mantras are also of three types:

These mantras are generally given through special initiations or empowerments, which constitute the foundation of Vedic practice. Practice of Vedic Yoga begins with Vedic mantras. This requires an awakened speech and contact with the Divine Word. This in turn requires that our soul, the immortal part of our individualized consciousness, which is a form of Agni, the inner flame, comes forth. The student repeats various Bija Mantras, Nama Mantras and Suktas as per his or her state of consciousness and approach to Divinity. The most common Bija mantra is OM. The most common Sukta is Gayatri Mantra.

Vedic Prana Yoga includes all types of Yogic techniques involving Prana, including different forms of Pranayama. It includes an observation of and gaining mastery over all the five main Pranas, the senses and the motor organs. It leads to the awakening of inner Prana and Kundalini Shakti, which is an internal form of electrical energy. For this to occur one must learn to offer the different aspects of one’s being, particularly one’s Prana, as a sacrifice to the indwelling Deity. Prana Yoga requires the development of Ojas (vital power) and the renunciation of sensory enjoyments to fuel it. Vedic Prana Yoga is of several types.

For Prana Yoga the power of Indra or Divine Prana must be awakened. This requires awakened vitality and energized insight. This occurs through the descent of Divine grace and power into the soul. One must contact God or the Divine creator within. The student performs various types of Pranayama using the breath along with the mantras learned, connecting more deeply with the Deities as forms of cosmic energy. The Kriya Yoga taught by Paramahansa Yogananda is one such practice.

Self-inquiry (Atma vichara) involves tracing the source of the I-thought back to its origin in the spiritual heart (hridaya). In the Vedic view this is tracing back our inner flame, the soul or Jiva, Agni, back to its original home and highest birth in the heart. This is a practice of constant wakefulness through which we become conscious in all the three states of waking, dream and deep sleep.

Self-observation involves contacting the solar light of consciousness and letting this effortlessly illumine all mental states, through the power of the illumined intelligence (Dhi or Buddhi). It consists in taking the attitude of a witness (sakshi-bhava) in all that we do.

Atmic mantras include great Vedic statements like “I am God,” Aham Brahmasmi, which are to be meditated upon in the expanse of the quiescent mind. They are useful only for a high level of disciple. Without preliminary self-purification they have little power. They must be done not with ordinary speech or mind but the highest level of speech, which speech on the level of the Divine Self.

For Dhyana Yoga, the expanse of the Sun or truth consciousness must be created. One must contact the Divine Self or Paramatman within the heart. The student meditates upon the Prana energized mantras and uses them to move into deeper states of consciousness.

The space of light and the light of space must be opened for this realization to proceed.

All three Vedic Yogas all lead to Samadhi or the state of absorption with the indwelling Divinity. This Samadhi Yoga is symbolized by Soma, which is the Ananda or Amrita, the bliss or nectar of immortality. Letting the Soma or bliss energy flow is the basis of this, perhaps the highest of the Vedic Yogas. This requires an opening of all the nadis or channels of the subtle body, through which the Amrita or Soma can flow. This in turn requires proper development of all three Vedic Yogas.

These four Vedic Yogas together form an integral Yoga. They culminate in a complete or Purna Yoga. Generally the Purna Yoga relates to Indra and to Prana but in the expanded sense as the energy of consciousness and insight on all levels. However there is also a Purna Yoga of Agni called Vaishvanara Vidya (knowledge of the Cosmic Person), which proceeds through Self-inquiry. There is similarly a Purna Yoga of the Sun, particularly in the form of Vishnu or Savitar.

In this Purna Yoga the second world or the Atmosphere becomes the all world or the Cosmic Ocean, the ocean of the heart as the fourth world. This ocean is space and its waves are the wrolds. In the space within the heart is contained all the universe and the Supreme Self beyond all manifestation. This leads to a slightly different formulation of the threefold Vedic Yoga.

The main form of Purna Yoga is meditation on the heart, which involves tracing the origin of speech, Prana and mind back to the Self in the heart, which is the main practice of Self-inquiry. This search is called gaveshana, or anveshana in Vedic texts. It is not done simply by repeating “Who am I?” but requires mantric and meditational control of speech, Prana and mind and an examination of all their movements in all states of consciousness as powers of the Atman.

The Vedic Yoga is vast and many sided. We have only outlined a few of its characteristic features. It has teachings which are appropriate for each individual and his or her level of development. It therefore has no mass teaching or standardized instruction. Each individual must be treated differently.

0 responses on "Vedic Yoga, the Oldest Form of Yoga"